Holland: The land of stroopwafel 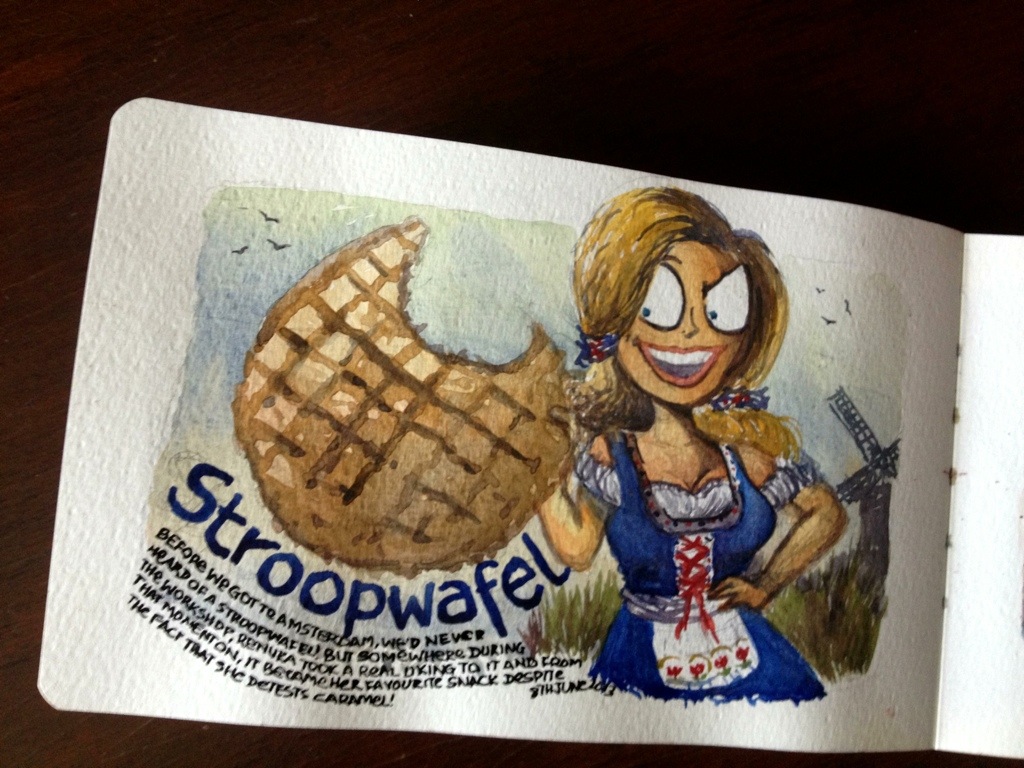 When I set out to do this cartoon, I did my research. And I was in the mood to do a bit of a sexy-sort Dutch girl. At first I had the usual Dutch pictures in the usual milking outfit, but I thought something a little racier would keep me in a better mood 🙂

But getting the details right was important to me. At first I did the painting without the background, fearing that the background would be a distraction. As it turned out, it wasn’t a distraction at all. The stroopwafel required a few passes of watercolour before I felt it was right, and I paint a second coat over the woman’s clothes at least a second time because it wasn’t strong enough the first time around.

A little touch was sneaking in the Dutch colours in her outfit (namely the white, blue and red).

Every place we go, we run into something we’ve never seen or eaten before. Amsterdam wasn’t an exception. At The Brain Audit workshop, Renuka ran into an unusual waffle—the stroopwafel (pron: strop-wah-fill) and fell in love with it. Why, I’m not really sure because she doesn’t care for waffles and detests caramel, which just happens to be the main ingredient in stroopwafels.

Well, she ate most of the stuff we bought in Holland and anything that we managed to bring home as well.

To eat a stroopwafel “correctly”, you have to be patient. You put the wafel on the rim of the tea or coffee cup. Then you wait. And wait. And wait. And 4-5 minutes later one part has kind of softened while the other stays firm. That’s when the wafel is supposed to make the best impact on your palette.

← Elmo sticks around to party in Vancouver The trams of Amsterdam →