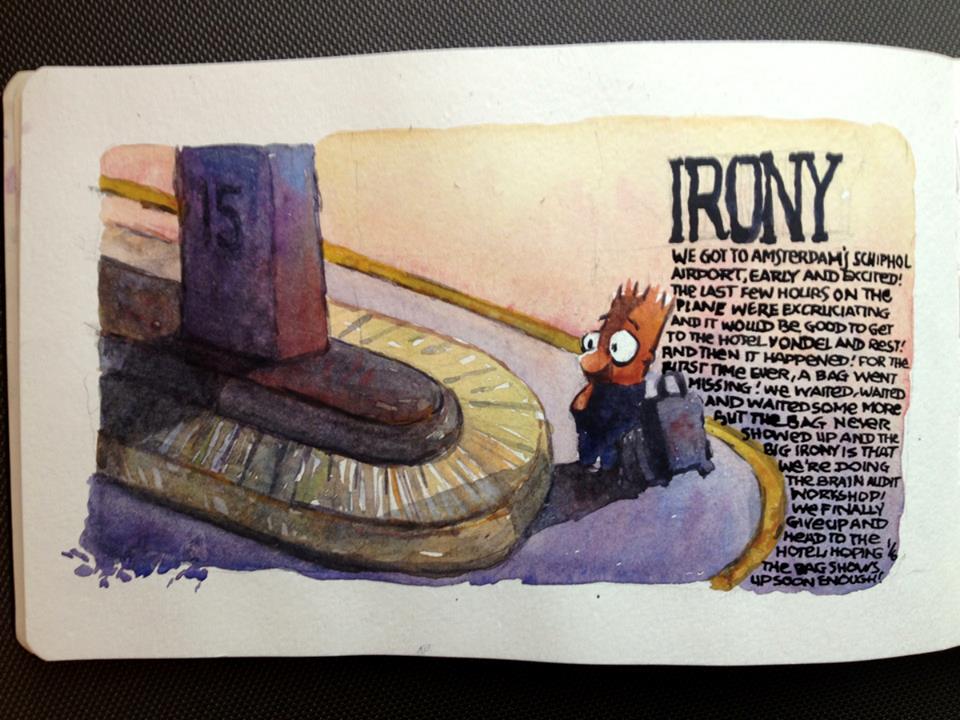 So there we are at Amsterdam’s Schiphol Airport all excited to be here. And of course, I’m doing The Brain Audit workshop, and yes, my bag’s missing. Now of course for anyone’s who’s read the book, you know right away how ironical this scenario happens to be. In The Brain Audit I talk about how the customer doesn’t make a decision because “a bag has gone missing” and yup, the bag does go missing in Amsterdam.

But there we were, slightly hassled because the bag contained all of our equipment for the workshop. It also had a “fragile” sticker on it, because it had all the equipment. As it turned out (and we found out after we got to the hotel), that wasn’t the case at all. Renuka put the “fragile” sticker on the wrong bag. The bag that went missing (and yes, we got it back) was the bag with Renuka’s clothes. The equipment was with us after all. But Renuka still had to wear my shorts for about 36 hours.

One of the important bits in art (or anything for that matter) is actually seeing things as they are. And one of the big things on a conveyor belt (or carousel) seems to be the big pillar in the middle. I never really noticed that before, but it’s there at a lot of airports. In an illustration, it’s very important to balance verticals and horizontals. Too many horizontals and the image is flat. Too many verticals and you have the same flatness. The pillar gave me enough to work with to add another vertical (other than Cuatro standing there, waiting for his bags).

The other issue was just the carousel itself. It’s easy to get all into the detail of the carousel. And the magic of watercolour is to let the eye see something, instead of painting all the detail. Which is what I did with this illustration. Just a few lines give you the idea of the carousel. And of course, Cuatro is looking so forlorn that you feel for him.

Better times, however, are just around the corner.

← Grumbly about sharing my umbrella Chilly entry into Amsterdam →